Millers Point: through the looking glass 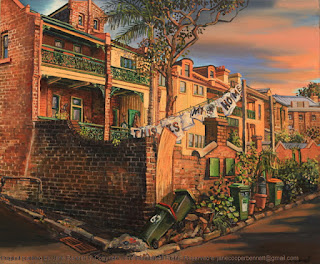 Thanks to Jane Bennett for allowing us to reproduce her painting, 67 Lower Fort St - This is my home.
Thanks also to Sally Parslow for her consent.

Let’s reflect on the forced relocation of public housing tenants from Millers Point. Here, the looking glass is The Brown Couch and Clearing House, blogs of the Tenants’ Union of NSW. A selection of posts allows us to see beyond the surface of the mirror.

19 March 2014: The O'Farrell Government announces the proposed sale of 293 public housing properties in Millers Point and the Rocks. The Tenants' Union of NSW condemns this sell-off of public housing. Here’s its media release following the announcement of the sale. Here's the residents' response.

24 March 2014: Fact Check: The truth about 'subsidies' at Millers Point and The Rocks.

31 March 2014: Fact Check: The truth about 'generations' of tenants at Millers Point and The Rocks.

25 June 2014: Millers Point and The Rocks: heritage under threat.

4 August 2014: Millers Point and the United Nations. Our colleague, Kim Boettcher, solicitor for The Aged-care Rights Service (now called Seniors Rights Service), addresses the United Nations' Open-Ended Working Group on Ageing and draws attention to the plight of tenants of social housing at Millers Point and The Rocks, and of other older persons.
Updates

7 October 2015: Eighteen months after the announcement of the sale, we take a sobering look at the impact on this unique inner-suburban community and its resident tenants. Our article is entitled: ‘You shall not covet your neighbour's house.’ Check our blog here.

19 November 2015: A new Minister for Social Housing provides a ray of hope ... Ninety public housing tenants remaining in Millers Point received letters in November 2015, with an offer to stay in the historic suburb by swapping their current homes for other non-heritage apartments. Check our blog here.

2 August 2016: We're saddened by the weekend's news that Sydney's iconic Sirius Building will not be listed on the NSW Heritage Register, despite the unanimous recommendation of the Heritage Council of NSW. Check our blog here.
The impact on the residents

8 September 2016: ‘Brutal’... This is how the residents describe the actions of Housing NSW in Millers Point. Their experiences are documented by Professor Alan Morris of the University of Technology Sydney. He allows the residents to tell the story of their displacement in their own words.

What is evident is that the actual and intended removal of public housing residents from Millers Point unleashed a great deal of hardship and distress. ... In sum, the way the New South Wales government has gone about the move was viewed by most interviewees as brutal. ... The announcement that all residents were to be moved was catastrophic for some residents and precipitated extreme anxiety and depression.


16 March 2017: We reflect on the third anniversary of the announcement to sell all public housing properties in Millers Point. We also reflect on a report of the Special Rapporteur to the Human Rights Council of the United Nations. At Paragraph 6, it reads:

In many countries in the global South ... the impact of financialization is experienced differently, but with a common theme — the subversion of housing and land as social goods in favour of their value as commodities for the accumulation of wealth, resulting in widespread evictions and displacement.


26 May 2017 and 6 June 2017: Professor Alan Morris of the University of Technology Sydney writes again about the experiences of the residents forced to relocate. We have called our blogs “It was like leaving your family’ and 'It was like leaving my family: Postscript'.

In the first of these blogs, we reveal that Professor Morris uncovers an early media release from then NSW Finance Minister who announced that the government was considering selling off much of the public housing in Millers Point, because 'the government needs to consider it in the context of all of the surrounding areas, including the Barangaroo redevelopment area.' [my emphasis]. Previously we wrote: 'Ponder ... the real agenda at Millers Point is to free up housing stock around Barangaroo for gentrification and to create a Paris Quarter ... a touch of Montmartre.'

27 July 2017: Our pleas to hit the pause button came to nought. We ask: 'Will the NSW Government show compassion and allow older residents of Millers Point to age-in-place in their homes? Yes, stop the evictions. Yes, seize the opportunity which the Land and Environment Court has provided and talk again about the importance of retaining social housing in Millers Point.' We say: 'You have received oodles of cash from the sales to date and you also announced a billion dollar windfall in revenue from stamp duty in this year's State Budget.' Check our blog here.

Hundreds of people on the social housing waiting list and hundreds more will have access to brand new homes as the NSW Government continues to deliver on its promise to build more housing through the sale of properties in Millers Point.

Fact Check: Check our analysis of the Minister's statement here.


15 June 2018: The Supreme Court gives the sole surviving tenant of Millers Point 28 days to vacate, after 42 years in her home and the Government stands to exceed its expected takings by $200 million. Millers Point changes forever. New social housing dwellings are being built using these monies, but in nearly all cases, they are not close-by. None of the Government's bonanza from stamp duty income has been channelled into expanding the provision of social and affordable housing. Check our blog here.

21 June 2018: There is only token acknowledgement of ‘ageing-in-place’ in Government policies. The redevelopment of old public housing estates poses real hardships for many older tenants where only lip service has been given to this principle. Check our blog here.

9 November 2018: With the sale of the final two terrace houses, Property NSW announces the end of the Millers Point sales program ... [but for] the sale of the Sirius building. So who are the new residents? We have glimpses: it's turned from struggle street to billionaire's row. And, of course, 'Kent Street' now is known by some as 'Rent Street', because of its many Airbnb listings. Check our blog here.

The sale of the Sirius building proceeds ... here’s the latest media articles. In late January 2019, Jacob Saulwick and Sarah Keogham write in The Sydney Morning Herald: ‘Don't sell Sirius to the Opal tower developer, local politicians urge Premier.’ Read their article here. They follow this up with a second article: ‘Opal developer pulls out of the running for Sirius sale.’ Read their second article here.

There are 30 posts on The Brown Couch  that make reference to Millers Point. Above is just a selection. For all posts, check here. When you reach the end of each section, click 'Next Posts'.

In addition to the above, there are 22 posts on Clearing House that make reference to Millers Point. For all posts, check here. When you reach the end of each section, click 'Older Posts'. 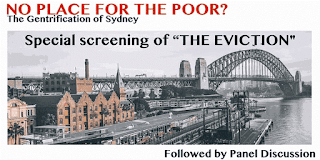 Check out venues and times here.

In June 2017 as well as the evictions out of Millers Point, Sydney was witnessing: the ongoing redevelopment of Airds-Bradbury; mass forced transfers out of the Ivanhoe estate for redevelopment;
and the planning for Waterloo ramping up following a year or more of uncertainty since the original announcement.

Into this context Shelter NSW, Tenants' Union of NSW and City Futures Research Centre at the University of NSW published a report entitled 'A Compact for Renewal: What tenants want from Renewal'.

On page 3 of the report it reads:

The next stage in the project following this is to present these findings to renewal agencies in NSW, including Government and community sector agencies and seek their feedback on the extent to which those agencies believe they can deliver what tenants want. Subject to the willingness of agencies to engage with the project, we seek to negotiate a set of ground rules by which agencies agree to manage renewal projects in social housing areas. In this negotiation, the project partners emphasise their willingness to understand what’s important for the agencies about the renewal process and to work through the list of what tenants want from renewal to identify a set of ground rules both parties are comfortable with.

Consultations continue. It is understood that there will be a meeting with Family and Community in late February 2019 to work through the details of the draft principles for engagement document. To date the parties haven’t been able to agree on a final document. The authors of the above report and its steering group are committed to ensuring the document remains authentic and does not dilute or compromise the voices and concerns expressed by the approximately 100 public housing tenants who participated in the consultation process and which informed the principles document. It is hoped that the document will be finalised soon and will be signed by all parties for implementation across agreed sites. This becomes especially crucial with the release of the Masterplan for Waterloo.

The above blog was prepared for the screening of the film The Eviction and panel discussion at University of NSW Law School on Friday, 1 February 2019.

On 28 June 2019 The Guardian reported: ‘Sydney's Sirius building to be refurbished after being sold for $150m.’ Check it out at: https://www.theguardian.com/australia-news/2019/jun/28/sydneys-sirius-building-to-be-refurbished-after-being-sold-for-150m

Here's a summary of the sales data: