We commence our first round-up of estate redevelopments with Riverwood North. 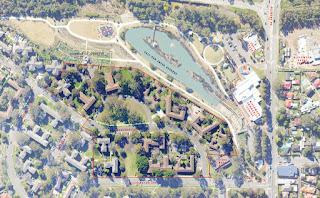 This is a redevelopment of about 150 public housing dwellings – mostly bedsits – in Washington Avenue, Riverwood, which are to be replaced by new, higher density buildings comprising about 150 social housing units, and 500 units for sale. The newly-built social housing units will be managed by St George Community Housing; the developer is Payce Communities.

Announced in September 2010, but talked about for a few years before that, the redevelopment is planned to take 10 years to complete. So far, all the tenants of affected buildings have moved out to other social housing premises, the old buildings have been demolished, and two new high-rises have been built. These are due to be handed over to St George in the next few months, which will let them as over-55s social housing. We understand St George and Housing NSW are getting in touch now with tenants of the old buildings to give them first option on moving back (but they'll have to pay their own moving costs). After that they'll offer tenancies to over-55s on the Housing Pathways register.

We understand from those on the ground that many of the tenants who moved out went from bedsits to new units with separate bedrooms, and that they were happy with that, and that Payce has been working to engage with the community by getting involved with the local school and community events.