Millers Point in the news

Millers Point is in the news again, with an excellent article by Tim Barlass in the Sun-Herald that focuses on the residents of Millers Point, and some political and historical context by Evan Jones at New Matilda. 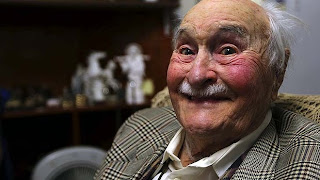 (Millers Point resident Robert Goodsell, 94. You'd like to think that he shouldn't have to worry about being evicted. Photo from the Sun-Herald.)

Not yet in the news is the outcome of the social impact assessment that was conducted recently for NSW Land and Housing Corporation, as part of the NSW State Government's review, announced in October last year, of its continuing ownership of the Millers Point properties.
We understand that a draft report is with LAHC. The stated intention of the SIA consultant was that the drafted report should be made public, for discussion and feedback, before the final report goes in to LAHC. We look forward with interest to seeing the draft.
Posted by Chris at 10:59 AM