Thanks to our friends at Minto Residents Action Group (MRAG) for this latest update. 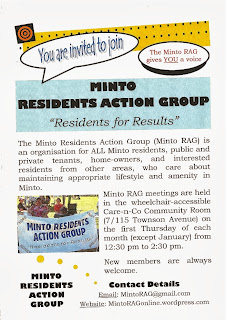 "Minto redevelopment is less than halfway through the project – even though on paper the plans are complete and they are just waiting on money to be released. The MRAG believe that we should endeavour to “keep them honest”.  Announced in 2002, started in approx. 2006 and predicted to finish in 2015.  It has already been put back at least 12 months.  Working Together in Minto (a human services project coordinated by HNSW) has withdrawn and the Minto Renewal Forum has ceased.  MRAG have been asked to join the Community Reference Group which will be formed by the new group working in Minto - Macarthur Diversity Services Initiative (MDSI) which so far do not have a worker. Our best alternative is inviting (Renewal, Land and Housing) and (Landcom) to our Minto RAG meetings. They do come when invited."