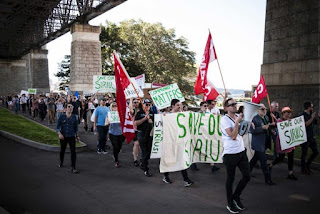 There has been considerable recent media coverage of the forced relocation of residents of Millers Point. Elsewhere we reported on Professor Alan Morris's Shelter Brief entitled 'A contemporary forced urban removal: The displacement of public housing residents from Millers Point, Dawes Point and the Sirius Building by the New South Wales Government'.

Ann Arnold of ABC's Radio National provides excellent coverage of 'the battle over Sydney's heart' in Millers Point. Her 'Background Briefing' segment runs for 40 minutes and you can hear it here.  It first was broadcast on Background Briefing at 8am on Sunday, 9 October. The transcript is now up. Click on ‘Show transcript’ here.  An article about this story is found here.

Ann Arnold and Tiger Webb, also of ABC's Radio National, write about the last days at Millers Point of Florence, Cherie and Barney, some of the few residents left.  Read their stories here.

And, the rally to save the Sirius Building, on which there is now a Green Ban, attracted over a thousand protesters. View this story here.

An update on the statistics of Millers Point ...

You will find the breakdown of properties, tenancies and number of resident at the start of the sale process in SGS Economics & Planning, 'Millers Point and The Rocks: An alternative way forward', Final report, August 2014, Table 1 (Social housing breakdown), p 4. At the outset there were 293 properties, 543 tenancies, 410 occupied tenancies and 590 tenants and household members.  Along the way, Darling House, an aged care facility, also was sold.
Sales

At the meeting of Millers Point Estates Advisory Board on 10 October 2016 Housing NSW reported:

•    399 tenancies in the portfolio.
•    353 have been vacated.
•    Of the 46 remaining tenancies to be relocated, 42 (numbering 59 tenant and household members) are from FACS Housing NSW and 4 (numbering 5 people) are from Little Real Estate.
•    16 of the 46 remaining tenancies (including 2 from the Sirius Building) involve residents approved for moving into alternative accommodation (6 staying within Millers Point and 10 outside Millers Point).
•    30 tenancies (numbering  42 people) are still to be rehoused.
•    15 properties set aside for remaining people remain unallocated, although one of these involves a possible allocation.
Of the remaining 30 tenancies, 5 are in the Sirius Building.